Orcs have returned to the caverns of the Glimmervaults;
the Goblin King and the Lord of Werewolves have renewed their ancient alliance beneath the Howling Tower;
and the secret treasury of the ancient Bronding Kings is said to lie somewhere behind the Brokenbrand Falls, haunted by enchanting naiads ...

...
and Jaer the Windlord is said to look down on the world below from the Eyries of the Eagles on Greyhame Mountain itself ...


Blackleaf also bought a sprig of nightshade, said to be helpful against enchantments if worn; and she glanced at the nosegay of dragonrose, said to put reptilian beasties like dragons to sleep, but didn't ultimately purchase it.

Thus equipped and with a full party of hirelings and dogs, Mizer acquiesced to Blackleaf's burning desire to return to the Brokenbrand Falls to seek out the turtle philosopher there, and to denude him of his remaining eleven gems. To this end, they borrowed the maps from Little Bob (who has heretofore generally been the party mapper), and then set out for the falls.

On the first day, a storm blew up, destroying a spear, plate armor, twelve arrows, a week of rations, and a shield; it was raining all the rest of the way. Then, on the third night, just before arriving, the party was surrounded by ghouls--they did what I had hoped "concreteness" for the wilderness attrition would allow, and reacted by offering to use holy water, flasks of oil, and the web spell to help reduce attrition, all of which I allowed (and I rolled a random number for vials of holy water and flasks of oil), and they managed to maintain a defensive ring around their camp and to drive the ghouls away by morning.

Arriving at the falls, Blackleaf got out the maps from Little Bob and realized they made very little sense, given that they're spread over three pieces of parchment, and include distant areas drawn close together on the same map, duplicate areas that don't quite match up, etc. She had a general idea of where to go to return to the great pool, but couldn't see how the areas all matched up.

Nevertheless, they went in, and turning east in the first series of halls where the green slimes tend to grow along the ceilings, they indeed found a colony. Finding it before it could surprise them, they burned it away with oil and torches; and then, looking at the map, figured they could find a quicker route to the large chamber with the falls itself than the circuitous southwestern route taken by other expeditions. This proved true; but the way was also blocked by five large fungal growths in the chamber that led down to the long hall.

Mizer mentioned the possibility of shriekers as the party hurled oil flasks at the fungi; and yet none of the flasks hit, but either sailed over and past, or were just dropped at the feet of the adventurers. Plucking up some courage, Mizer crept into the room with his torch, hoping to burn one, and then sure enough, a horrible shrieking started coming from two of the fungi; meanwhile, the others began shuffling toward the party.

They sent the dogs in, while the humans stayed back and hurled missiles at the fungi; this tactic worked quite well, and soon all the fungal growths were destroyed, largely torn apart by wardog teeth. Only one of the dogs was seriously hit, and had wisps of fungal tendrils sprouting from where a fungus had struck him; Blackleaf carved the infected flesh away with a knife, injuring the dog, but successfully cutting out the infection.

Beyond the fungi, a set of stairs led down into a long north-south pillared hall that at its northern end turned east. Checking around that way, the party found the eastern hall led to a great pool, while the pillars became stalagmite/stalactite columns carved to look like trees and which bore jeweled fruits. There was also a cave leading down into the depths; but Blackleaf remembered that the party had come down from the north after the first encounter with the turtle; checking the water, they found a path of stepping stones in the water that led north, against the current, and along which the party thence followed.

Something struck at one of the dogs from the water's deeps--something silver and flashing and big--but it didn't get a firm bite, and the party went quickly enough against the current to avoid any further interactions with it.

Coming out onto a shore of stone, the party found a stair that led up and to the north; following this, around several windings, they ultimately came out into a sun-filled canyon with the stream flowing south on their right, and a stair leading up under the cliffs. On their left was a door which they ignored, and on their right, into the cliff over the streams, a grotto, which they likewise ignored. Following the stairs all the way, they came to a bridge that spanned over the stream and onto an arcing east/north shore of stone around a large pool of crystal clear water, open to the sun and surrounded by high rock walls. On the north shore stood an image of Astora, Elf-Queen, at the base of which lounged several naiads.

This was the pool where the turtle had been, but the turtle-philosopher was not currently present.

When the naiads saw the party, they swam over, making eyes at the men in the party (everyone except Blackleaf, really)--that is, until they saw that no one had a higher than average Charisma. Dol the former fyrdman exchanged a couple winks with the naiads, which somewhat encouraged them, but Blackleaf put a stop to that by glaring and reminding Dol that he was on her dole.


Without any takers, the naiads rolled their eyes and flounced away downstream.

Looking for the turtle, Blackleaf stuck her head in the water--she saw something glittering at the bottom of the preternaturally clear pool, but no turtle. An attempt to swim down (taking armor off before) resulted in her just getting caught up in the current and swept south until she could grab the shore and haul herself out, dripping and cold.

Now, around the pool, into both the northern and eastern cliff walls, were several entrances into further dungeon areas; the party decided to investigate the one whence issued a stream that fed into the pool. Following that corridor, they came to a room with a basin of water within which stood a naiad statue, and which was filled with the debris of several huge spiders, egg sacs, and several desiccated corpses (Blackleaf here recalled the spiders that almost killed Lead several expeditions back). Heading north from there, the party entered a room with a pool fed by a fall from the northwest, an image of a Bronding king against the north, a stair up and through the west wall--and a sleeping turtle-philosopher with eleven gleaming gems in its shell, off to the northeast. 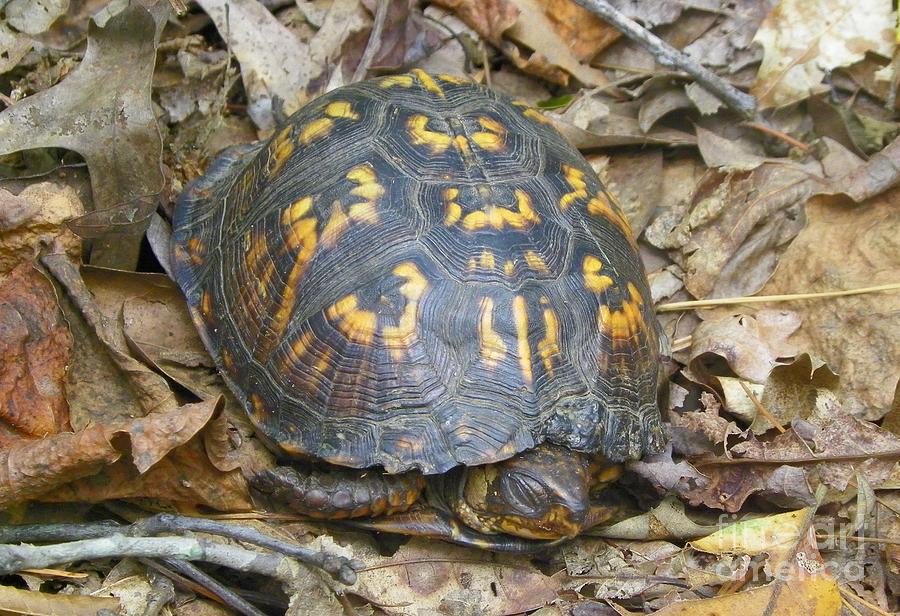 Blackleaf, overexcited, convinced Mizer to cast web on the sleeping creature, thus entrapping it in a net of sticky strands. The casting of the spell awoke the turtle, and as it opened its eyes and witnessed the party approaching, it began to speak. What's this? Do you all think I'm some kind of beast, inconsiderable of moral standing, or are you such cravens that you just go around casting spells on helpless individuals all the time, eh? Do you cretins even know what moral standing is, or how you would determine whether a thing is worthy of consideration? Well?

All of the hirelings and Mizer as well failed their saves against this tirade of philosophy and stood entranced as the turtle began to elucidate the nature of parsing moral standing (this, while the turtle also began to rock and struggle to break free of the webs--it looked like it would get out before too long ...). Blackleaf, however, succeeded in her save, and with her dogs (which, being beasts, gave not a whit to the turtle's philosophizing), she stepped forward and started attacking the webbed turtle.

I see that you, like all your pointy-eared kind, care nothing for the suffering of others! the turtle declared as Blackleaf's sword and the teeth of her dogs scrabbled and clanged on his shell. But he could do nothing other than rage impotently, trying to break free of the webs. After two short rounds of attacks, he was bleeding and beaten enough that he simply dropped his head. Take all my jewelry, he said. Just please don't kill me.

Then Blackleaf called off her dogs, pried the gems free from the turtle's shell, and then the turtle, with a surprising speed, fled into the water and went away downstream, bloodying the water.

Each of the eleven gems seemed to be worth about 1000 gold; and with their ill-won jewelry, the party elected to quickly return home. Back in the large chamber with the pool, they briefly spied the turtle's head above water, but then he vanished quickly again beneath the waves.

Also, on their way out, they glanced into a shallow cave in the northeast corner of the chamber, and saw within an old skeleton crouched in death on a great throne, with a crown of nine glittering diamonds upon its head. Blackleaf, ever greedy, reached out with her sword to lift the crown, and immediately she touched it, a mist rose up all around, misty figures within, and a ghostly voice questioned, Art thou so certain thou art worthy of mine crown?

Wanting none of this, Blackleaf returned the crown, and the mists dissipated; and then the party fled out of the dungeon, and back down the stairs by the waterfall at the entrance. Dol managed to fall in, and yet never resurfaced. Going into the water to look for him, Blackleaf glimpsed him swim away with a group of naiads, but lost sight of them in the churning water under the falls.

On the way back to town, while fording a river, the party lost 12 arrows, a dagger, a shield, a week of rations, and all of Mizer's torches; then, that night, in a bout of hypothermia, Mizer managed to further lose a shield, sword, another week of rations, and more ammunition (he put them down somewhere during a shivering bout, but when he woke up the next morning, not dead, could not recall what he'd done with them ... sure, that'll work).

Back in town, Blackleaf used her portion of the proceeds from the gems (some 5500 gp) to pay off her 5000 gp debt to the thieves' guild, leaving her barely in the black. She then went to Lailith, the lawful good cleric of St. Ursula in town, and talked over some of the stuff the turtle had said, which had stuck with her, and ultimately felt something of remorse. She now feels that she must do something in restitution for the turtle, if she truly is to gain a human soul and the empathy that it entails.

Meanwhile, Mizer caroused, and managed to win himself a reputation as the life of the party in Brakeridge--any further carousing in that town will cost double for normal the amount of xp, until or unless he does something to change that reputation.

And for those Enchanted Away
Dol (fyrdman hireling)

Stories and Poetry by Cullen Groves